The text editor for all of us

Smultron is powerful and confident without being complicated. Its elegance and simplicity helps everyone being creative and to write and edit all sorts of texts.

Use Smultron to write everything from a web page, a script, a to do list, a novel to a whole app.

Smultron is designed for both beginners and experts. It is a joy to use and it has all the text tools one needs. And everyone can use it because it is translated into many languages and has full support for accessibility.

There are other versions available for earlier releases of macOS

Free to download and try out, you can then choose to buy it or not.

Upgrade and site licenses are available

You pay once for this version and you can use and keep it forever. It is not a subscription.

You can also buy it from Mac App Store → 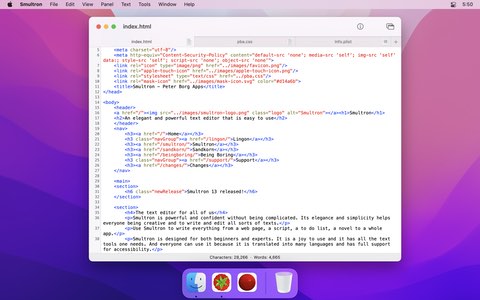 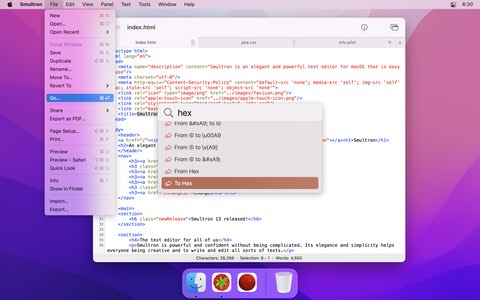 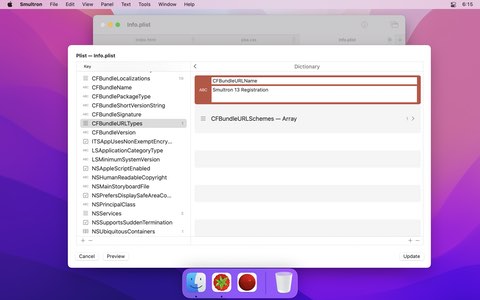 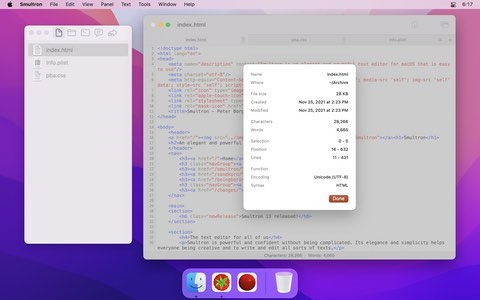 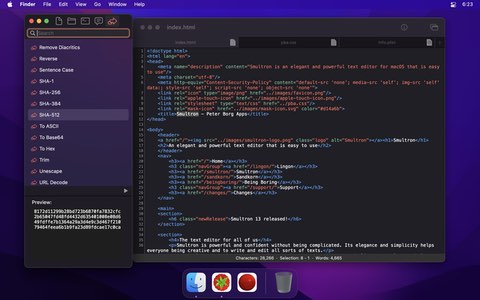 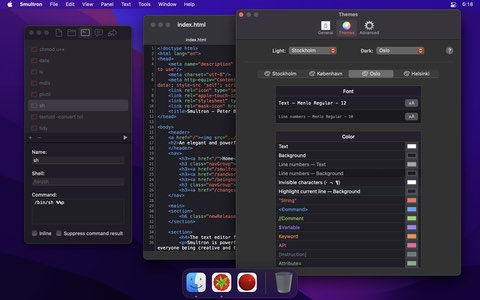 The new Smultron 12 is the best ever Smultron and has the following new features:

(Earlier versions do not include all features listed on this site.)

I recently bought a license for Smultron 11, can I upgrade for free to Smultron 12?
A license bought on or after 1 July 2019 is eligible for a free upgrade. If you bought it from the Smultron Store after that date, you can use that license for Smultron 12 as well. If you bought it from Mac App Store you need to contact us with proof of purchase and we’ll send you a new license. If you bought Smultron 11 before that date you need to buy Smultron 12 in Mac App Store or get an upgrade license.
Is version 12 a paid upgrade?
Yes, if you have an earlier version you either need to get an upgrade license in Smultron Store or get the upgrade bundle from Mac App Store.
Which languages is it available in?
English, Arabic, Chinese (Simplified), Chinese (Traditional), Danish, Dutch, Finnish, French, German, Greek, Hebrew, Italian, Japanese, Korean, Norwegian, Portuguese, Russian, Spanish and Swedish
Is there a demo version?
Download the app and you’ll have all the functionality except that you can’t save a document until you buy a license.
How can I buy a license?
You can either buy it from Mac App Store or buy it from the Smultron Store (if you download the app you can also buy it from within the app by choosing Purchase... from the Smultron menu to use the secure built-in store).
How do I register the license?
Choose License... from the Smultron menu and input the exact values you received in the confirmation mail.
Why can’t I update my app bought from Smultron Store?
Because of security measures in macOS you have to move the app at least once before you can update it. So if for instance you downloaded the app to the Downloads folder on your Mac, quit the app and then just move it to the /Applications folder and then you can update it.
Some of my images and my CSS aren’t loaded in Preview?
Because Smultron is what is called sandboxed (to protect you and your computer) it can’t read files that aren’t open in Smultron. You can solve it by opening the individual files in Smultron or open an enclosing folder in Folders, which will then allow Smultron to read all those files. If the images and CSS files are directly accessed from the web, make sure that they are served using TLS, that is, they use https.
Is VAT included in the EU price?
Yes. And if you are registered as a company in EU and have a valid VAT ID you can buy it without VAT on the Smultron Store.
Can I change the file extension a particular syntax uses?
Yes, you can do that in Preferences - Advanced. Choose the syntax in the menu and then add or change the extension in the text field next to the menu (a space between each extension and no dots).
How do I assign a keyboard shortcut to any menu item?
You do this in System Preferences - Keyboard - Shortcuts. Choose App Shortcuts and then press + and then choose Smultron and write the exact name of the snippet or command.
How do I change a keyboard shortcut?
You do this in System Preferences - Keyboard - Shortcuts. Choose App Shortcuts and then press + and then choose Smultron and write the exact name of the menu item and choose a new shortcut.
Why does it insert an extra space when pasting some text?
That is a standard system feature which is there to help you with pasting text. But you can turn it off by deselecting Smart Copy/Paste in the Edit menu, under Substitutions
Why does it replace some of the text I write with another character?
That is a standard system feature which is there to help you write those characters. But you can turn it off if you want in the Edit menu, under Substitutions just deselect Text Replacement. What exactly is replaced is decided by System Preferences - Keyboard - Text.
How can I open “hidden” files?
When you are in the standard open dialog just press Command and Shift and a dot.
How do I change the language Smultron uses?
The language used is determined by your system setting in System Preferences - Language & Region and in macOS 10.15 Catalina and later you can change the language for only Smultron directly here. If you are using an earlier macOS you can change the language that Smultron uses to for instance English by writing this command in Terminal:
How can I show hidden files in Folders?
Quit Smultron and write the following command in the Terminal app:
Is there a command line utility?
There isn’t a command line utility available for Smultron but you can use standard commands to do the same thing (and more). Use for instance:
Which code languages have syntax coloring?
ActionScript, Active4D, Ada, AMPL, Ansible, Apache, AppleScript, Arduino, Assembler Atmel AVR, Assembler x86, Assembler MIPS, Assembler PPC, ASP - JavaScript, ASP - VB, ASP.NET - C#, ASP.NET - VB, AWK, Batch, C, C++, C#, Ceylon, Clojure, Cobol, CoffeeScript, ColdFusion, Crystal, Csound, CSS, CUDA, D, Dart, Diff, Dylan, Eiffel, Elm, Erlang, eZ Publish, F#, Final Cut Pro XML, Fortran, Fountain, FreeFem++, GEDCOM, GIFT, GNU Assembler, Go, Gravity, Groovy, Hack, Haskell, Header, HTML, IDL, Idris, Java, JavaFX, JavaScript, JSON, JSP, Julia, Kotlin, LaTeX, LESS, Lilypond, Lisp, Logtalk, LSL, Lua, Make, Markdown, MathProg, Matlab, Metal, MetaPost, MEL, Metaslang, Modula-2, Multi User Forth, MySQL, Nemerle, NEURON, nginx, Nim, Notation3, NPL, Objective Caml, Objective-C, Ox, PARI/GP, Pascal, PDF, Perl, PHP, Plist, PostScript, PowerShell, Processing, Prolog, Python, Quanty, R/S-PLUS, Rebol, Rexx, RHTML, Ruby, Rust, SAS, Sass/SCSS, Scala, Scheme, Servoy JavaScript, SGML, Shell, Smalltalk, SML, SQL, Stata, Strings, Stylus, SuperCollider, SVG, Swift, Tcl/Tk, TorqueScript, Turtle, TypeScript, Udo, UnityScript, VB, Verilog, VHDL, WebAssembly, Xcode config, XLIFF, XML, XQuery, YAML, Zimbu

In Advanced Find you can use regular expressions to find and to replace whatever you want. Regular expressions are very powerful but also quite complicated to use properly. Below is a short list of some expressions you can use when searching but for a complete list you can go to: https://unicode-org.github.io/icu/userguide/strings/regexp.html

By using the licensed or demo version of Smultron you agree to the following (this only applies when you get the license from Smultron Store - the EULA for Mac App Store can be found here):